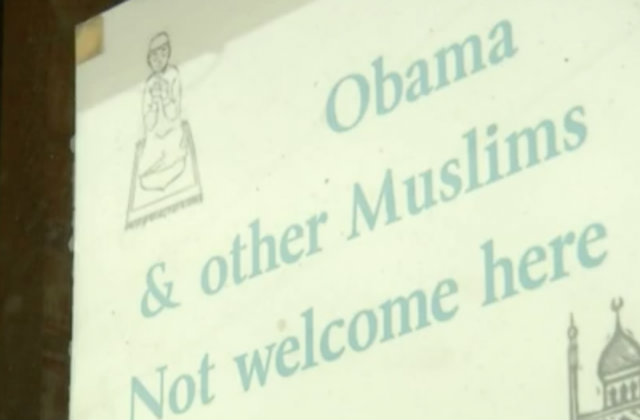 A Muslim advocacy group took legal action against a New Mexico business that put up sign that said “Obama and other Muslims Not welcome here.” The Council on American-Islamic Relations (CAIR) filed their complaint against the Mayhill Convenience Store last Wednesday. Other alleged signs included “Where is the KKK When you need them?” “Colin Kaepern—er you overpaid Half Breed Take your millions and go back to Africa,” and “Caitlin Jenner needs to give his balls to Obama. Jenner doesn’t want his and Obama ain’t got none?”

According to CAIR, another sign showed a noose dangling from a tree. It read, “Obama Swing Set.”

“The civil rights movement sought to eliminate discriminatory signs denying service to members of the public based on their race, religion or national origin,” said CAIR Litigation Director Lena Masri. “We must ensure that we do not allow the bigotry of the past to resurface and be normalized in the form of Islamophobia.”

The New Mexico Department of Workforce Solutions fielded the complaint. Deputy Cabinet Secretary Erin Thompson told Law&Crime in a phone interview Wednesday that the investigation is ongoing. The target turnaround time is 180 days, though that can vary from case to case. She said officials will review the claim for accuracy and legal basis.

As explained in the complaint form, an allegation of discrimination must cover at least one category under the New Mexico Human Rights Act, such as race, age, sex, religion, color, national origin, ancestry, physical or mental disability, serious medical condition, retaliation, gender identity, sexual orientation, or spousal affiliation. The law protects people in context of house, credit, and public accommodation (the last of which includes businesses).

Mayhill Convenience Store could not be reached for comment. Facebook and Yelp pages in its name featured an out-of-service phone number.

“They weren’t the same ones, but they were similar,” former employee Marlon McWilliams told the Albuquerque-based KOB4 in December 2016. He said he tried to avoid the store. “They’re offensive to me from time to time, but you know that’s my opinion.” He said the business was up for sale. The outlet said it couldn’t reach the owner for comment.