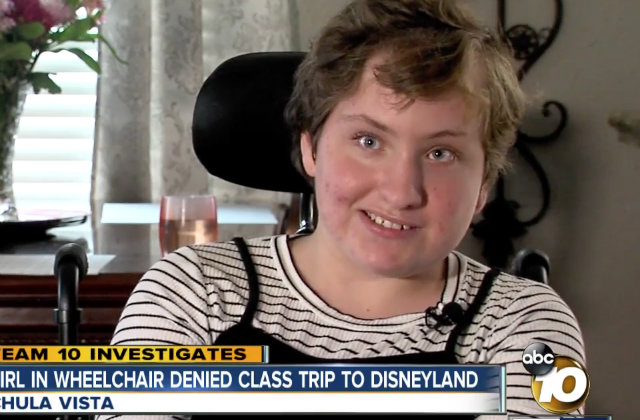 14-year-old Madison Wolanyk and her dad Eugene have geared up for a fight with Hilltop Middle School in Chula Vista, California. The girl, who was born with cerebral palsy, spina bifida and autism, claims she got denied a February class trip to Disneyland because the bus didn’t accommodate her wheelchair. Daughter and father spoke all about it to 10News.

In a letter sent to the school, she said her adaptive PE coach initially asked her if she was going on the trip, and she answered by saying she wasn’t sure. As told to the media outlet, the teacher later told her to hand out permission slips, but she didn’t see hers.

Mr. Wolanyk said he first brought his concerns to the vice principal.

“He just told me very matter-of-factly there’s like 100 students going so we couldn’t get the lift for the bus, so that’s why Madison’s not going,” he said.

Insult to injury, the VP allegedly gave the Wolanyks two complimentary tickets to Disneyland–which expired that same day. It was too late to pack up, and drive two hours away to the theme park.

He filed a claim with the Sweetwater Union High School District, saying his daughter also missed the previous year’s trip because of the lack of ramp. The complaint said this violated the Americans with Disabilities Act.

The family isn’t budging from their claim.

“I am just a girl in a wheelchair,” an adamant Madison told the outlet. “I am not a toy. I am not a lifeless toy.”

We reached out to the Sweetwater Union High School District’s communications and legal department for their take on the matter. They may not say much, though. Spokesman Manuel Rubio told 10News that they can’t say much since it’s a pending legal matter. He just gave this statement:

Update – April 28, 10:39 p.m.: The earlier version of this article incorrectly attributed research to KTNV. It is actually from 10News, so we have corrected the text.