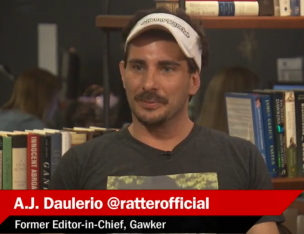 Several jurors in the Hulk Hogan trial seemed bothered by what one report called the flippant testimony of former Gawker editor in chief A.J. Daulerio on Wednesday.

On the third day of the trial, jurors watched videotaped deposition testimony where Daulerio seemingly refused to give straight answers to questions from Hogan’s attorney about his opinion of what was newsworthy and posting sex tapes.  Here is an example of one back and forth:

“Can you imagine a situation where a celebrity sex tape would not be newsworthy?”

Daulerio answered flatly, “If they were a child.”

Gawker commented on the exchange, saying, “He’d just said in the prior answer that that he wouldn’t post a tape of a child and when the question was repeated he obviously made the point in a flip way because his answer was already clear.”

In another exchange, Daulerio freely admits that he couldn’t care less about Hogan’s feelings as it related to the sex tape.  As long as he thought it was newsworthy, he would post it.

“Did you give any consideration prior to Oct. 4, 2012, as to whether publishing the Hulk Hogan sex tape would distress Hulk Hogan,” the lawyer asked.

“You didn’t care, really, did you?” Harder asked.

“Had you known that Hulk Hogan would be emotionally distressed by this publication you would have still published it, correct?” he was asked.

Reading these exchanges, it is easy to see why at least three jurors were noticeably “distressed by Daulerio’s cavalier attitude” as it related posting the sex tape of the former professional wrestling icon.

You can read even more of Daulerio’s thoughts about the newsworthiness sex tapes that the jury did not hear courtesy of a tweet from David Bixenspan:

AJ Daulerio’s testimony Re: sex tapes he wouldn’t run gets pretty funny after where it stopped in court #hulkvsgawk pic.twitter.com/OOeqBqAXSV