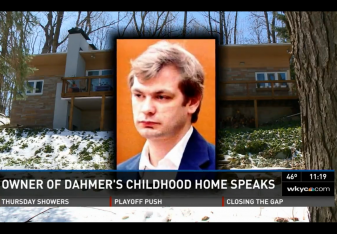 The childhood home of one of the nation’s most notorious serial killers is up for rent this summer during the Republican National Convention in Cleveland.

If you are looking for a rental home during RNC Week in Cleveland that’s a little outside of the hustle and bustle of the city, perhaps this Howard Hanna Property Management listing sounds perfect:

A 2,170 sq. foot mid-century modern home with three bedrooms and 2 and a half baths.  The home sits on 1.55 acres of land that can be described as a “park-like setting.” The property is located at 4480 W. Bath Rd., Akron, OH 44333 and has easy access to Interstate 77, which is an approximately 30-minute straight shot north to the convention hall at Quicken Loan Arena.  As of the most recent listing update this morning, the property can be yours for $10,000 for the week during the RNC.

According to Cleveland NBC News affiliate WKYC, the $10,000 asking price is on the low end, compared to some of the 477 other properties listed through Howard Hannah during RNC convention week.

Sure…  Well, once you get past the fact the that it was the childhood home of American serial killer Jeffrey Dahmer.

According to reports, at least one of Dahmer’s victims, Steven Hicks, was killed at the home and his remains were scattered throughout the 1.55 acres property.

“If you get past that little problem, you’ll have a wonderful little place to live,” Chris Butler, the current owner, told WKYC two years ago when he gave an interview in the hopes of attracting a buyer.

Dahmer was arrested in 1991 and he confessed to the gruesome killings of 17 young men and boys.  In 1994, Dahmer was bludgeoned to death by another inmate inside a Wisconsin prison where Dahmer was serving multiple life sentences for his crimes.