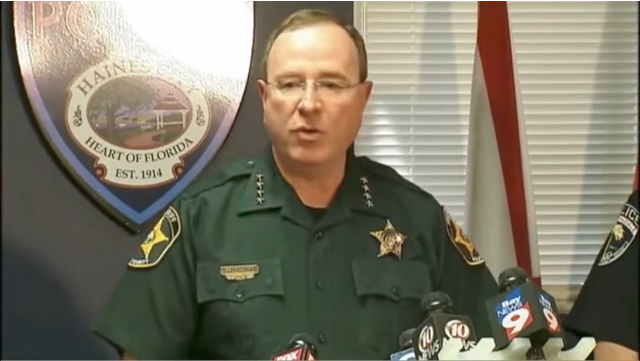 If you go to a shelter for #Irma and you have a warrant, we’ll gladly escort you to the safe and secure shelter called the Polk County Jail https://t.co/Qj5GX9XQBi

Twitter users accused the Sheriff of endangering lives because the threat of jail time might discourage people with warrants from seeking shelter.

Insanely badass to endanger the citizens you serve. I hope your tweet goes really viral and you get whatever benefit you were hoping for!

So basically this guy is encouraging anyone with a warrant, which are issued for things such as outstanding parking tickets, to risk death?

i actually don’t think you should have to die in a hurricane just because you have a warrant. just my take

This definitely won’t cause anyone to try to ride out the storm because they have too many unpaid parking tickets or whatever. Good job

Others accused Judd of responsibility for any deaths related to the threat:

Can the @PolkCoSheriff be charged with murder if people with minor warrants die due to the Sheriff’s complete lack of a soul?

This goes against every principle in disaster management you small minded man. We don’t do this because it kills people.

This is monstrous. You are going to kill people and their families over unpaid parking tickets.

Those concerns were brushed away by Polk County Sheriff’s Office Public Information Officer Carrie Horstman, who said in comments to the Orlando Sentinel, “Officers are legally obligated to take a person into custody if they have a warrant.”

LawNewz reached out to Hortsman for clarification on whether the threatened jail time would include people wanted for non-violent crimes like parking tickets, traffic tickets and low-level drug offenses. She replied in the affirmative, and said, “We hope that people who realize they have warrants will turn themselves in.”

When questioned as to the safety of using Polk County jail as a de facto shelter for people with outstanding warrants, she said, “We’re well aware of what our facilities can and can’t handle. If there’s an issue regarding the safety of our inmates, we’ll consider moving them somewhere else, we’ll take care of it.”

Sheriff Grady Judd is well-known in his county for controversial statements and actions in the past. He’s urged residents to carry guns in the wake of mass shootings. He once cracked a joke about police shooting a suspect 68 times. And, in 2012, Grady was sued by a civil rights organization for “subjecting children held at the county’s adult jail to abuse, neglect and violence.”