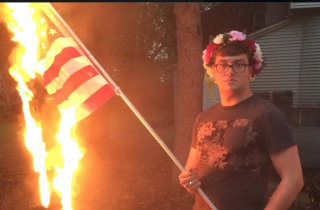 We wrote about Bryton Mellot back in July. Illinois authorities arrested him under state law after he burned a flag, and posted it to Facebook. That didn’t last long, though, since flag burning is actually protected speech, so charges were quickly dropped. Now he’s suing.

The complaint, filed Wednesday in the U.S. District Court for the Central District of Illinois, says three Urbana Police Department officers and one sergeant violated Mellot’s freedom of speech as well as his right to be free from unreasonable searches and seizures.

“At the time of the arrest, Defendants had no probable cause to believe Mr. Mellott had committed any crime,” the complaint states.

His lawyers from American Civil Liberties Union of Illinois now want the state’s flag desecration statute, 720 ILCS 5/49-1, declared “unconstitutional on its face and as applies to Mr. Mellot.” They also demanded damages and court fees.

The Constitution is on Mellot’s side at least when it comes to the First Amendment claim. 1989’s Supreme Court case Texas v. Johnson establishes that flag burning is protected speech. That’s exactly why Champaign County State’s Attorney Julia Rietz announced that he wouldn’t get charged under the state law—which was enacted in 1907, but never repealed.

We’ve reached out to the UPD, who is not a party in the lawsuit, for comment. In July, they responded to the dismissal of charges like this:

Laws dealing with questions of Constitutional rights are extremely complex. The Urbana Police Department recognizes that this is a case where the right of free speech may have been in conflict with the safety of innocent and uninvolved citizens. Our officers strive every day to achieve a balance between public safety and preservation of Constitutional rights. In this circumstance, our officers acted in good faith and in reliance on a state law that was passed by our legislature in an attempt to do just that. We respect the analysis of the State’s Attorney’s Office and their determination not to proceed with the prosecution in this matter.

With this in mind, the defense may well put up a stiffer fight when it comes to Mellot’s Fourth Amendment claims.