VIDEO: Woman Turns Table on Cop and Pulls Him Over for Speeding 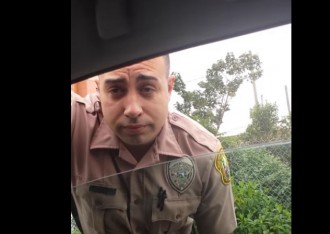 Nearly everyone has pushed the speed limit when running late for work at least once in their lives —if not more regularly— and almost like clockwork, you blow through a speed trap and look up in your rearview mirror to see the unwelcomed sight of those dreaded flashing lights.  As those flashing lights get closer and closer, you feel an unmistakable knot form in your stomach and that’s when you know, you’re busted.

Well, a Florida woman turned the tables on a Miami-Dade police officer when she managed to pull him over to accuse him of speeding.  This entire bizarre episode plays out over the course of three short videos taken and narrated by the citizen driver, identified as Claudia Castillo.

According to Castillo, she noticed the officer blow past her at what she felt was a high rate of speed.  She told a local news affiliate that the officer had to be traveling over 100 mph because she was doing 80 mph and couldn’t catch him.  Not to be denied, she evidently continued her pursuit as the second video begins with the officer appearing to slowdown to pull over, while Castillo explains how she was able to catch up with the officer, get up next to him and motion for him to pullover.

However, the officer appears to have second thoughts about pulling over and the pursuit begins again.  Castillo surmises that the officer might be looking for a safer area to stop rather than on the side of a congested I-95.  Castillo continues following the officer, while offering her thoughts on leading by example, amongst other issues, when the officer finally does pull over after exiting on to a surface street.

The third video —the best by far— begins with the officer approaching the passenger window of Castillo’s car, but instead of asking the questions, it’s the officers turn in the hot seat.  As soon as she rolls down her window, Castillo unloads on the clearly surprised officer, “The reason I pulled you over today is because I saw you, since Miller Drive when you were first jumping onto the Palmetto, and you were pushing 90 miles per hour.”  Castillo continues on, listing off alleged infractions in a manner similar to that of Jim Carrey in Liar Liar when he is stopped for speeding.

The officer denied that he was speeding and informed Castillo that he was on his way to work and only stopped because he thought she might have an emergency.  The officer then promised to slow down in the future and told the Castillo to be safe, before returning to his vehicle and presumably on to work.

A department spokesman told the Miami Herald that the department was aware of the incident and it would be investigated.