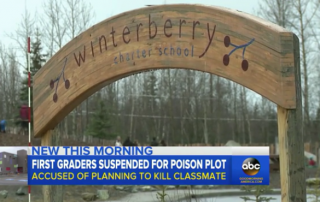 Three first grade girls at Winterberry Charter School in Anchorage, Alaska were accused of trying to kill their classmate, Good Morning America reported. The students allegedly planned on putting the silica gel packets from their lunch bags into another student’s lunch, thinking they were poisonous. While the packets are marked “do not consume,” they are non-toxic, although the small beads inside could be a choking hazard.

School officials found out about the alleged plot when another student overheard the plan and told them. No charges were filed, but officials say all three students were suspended. A police officer also spoke to them and their intended victim to explain the seriousness of what they tried to do.