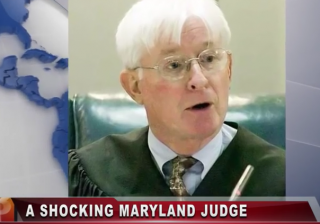 A former Maryland judge who pleaded guilty to a civil rights violation will be sentenced in federal court on Thursday, the Associated Press reported. Judge Robert C. Nalley ordered an officer to activate the “stun-cuff” a defendant was wearing around his ankle during court proceedings.

According to the statement of facts in Nalley’s plea deal, the defendant who appeared before him was representing himself in a criminal matter in July 2014. When he repeatedly ignored Nalley’s questions and orders to stop talking during jury selection, Nalley said to the deputy sheriff, “Do it. Use it.” The defendant stopped speaking while the officer approached him, and then dropped to the ground screaming when he activated the cuff, giving the defendant an electric shock for five seconds. A few months later, the Maryland Court of Appeals revoked his ability to hear cases. He had been a judge since 1988.

As part of the plea deal, Nalley admitted “”that the use of the stun cuff was objectively unreasonable under the circumstances.” He is subject to a maximum sentence of one year in jail and a fine of up to $100,000, but as part of his deal, prosecutors will recommend that he be sentenced to one year of probation.

In 2010, Nalley was convicted of tampering with a vehicle. He pleaded guilty to deflating the tire of a cleaning woman who was parked at the courthouse in a restricted zone. He was fined and suspended without pay for five days for the offense, and had to write a letter of apology.