Driver Gets Life Sentence For a DWI 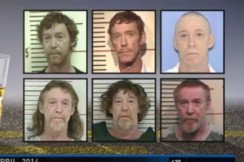 A drunk driver from Texas got a life sentence Wednesday. Who did he kill? Nobody.

Ivy Ray Eberhardt, 62, is incorrigible in the worst way. His most recent DWI arrest was actually his 10th. A cop saw him swerving down a Weatherford, Texas road. Lo and behold, he was intoxicated with a blood alcohol level of .30. That’s three times the legal limit.

“You can be comatose at .30,” said prosecutor Jeff Swain.

“We, in Texas, have sent him to prison three times for DWI,” said Swain. In fact, he said he got Eberhardt sent to prison way back in 1998:

Nobody wants to go to jail, but Eberhardt’s been arrested 12 times. Counseling sessions and probation terms didn’t seem to work. Not even the ankle monitor he got after posting bail for the 2014 arrest. Monitor, meet knife. He cut it off, and drove to Colorado. Police there inevitably arrested him for drunk driving and sent him back to Texas after 300 days.

Parker County Craig Towson thought enough was enough. He said the prolific drunk driver was a danger to the community. The life sentence was handed down, and Eberhardt will only get a chance for parole after serving 15 years.

But is this a legal sentence? A Texas conviction for a DWI can net you up to 180 days in jail for a first offense. Second offense: a year. That third conviction is when the state stops playing: Offenders face up to 10 years in prison.

It’s plausible for Eberhardt to appeal his conviction under the 8th Amendment’s prohibition against cruel and unusual punishment. After all, when you think of life sentences, you think of murder. Nothing about this is typical.

But take your eyes off Texas to look at California. That state’s three strikes law wasn’t typical either, and it was upheld by the U.S Supreme Court in 2003. So criminals in Cali have to serve at least 25 years behind bars for a third felony conviction, though the law’s softened a bit in recent years.

It seems bleak. But the Supreme Court only reached that decision with a 5-4 majority, and there are now different judges on the bench. Who knows how an Eberhardt appeal would go? Then again, he’d have to push for it in the first place.