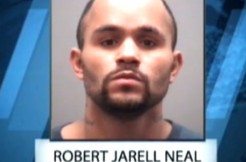 Terrance Daniels, 45, was simply “talking” with a friend when he was stabbed Jan. 9 in Burlington, North Carolina.

Daniels is deaf. Of course, he communicates with sign language. If you’ve never seen it in action, articulate speakers move their hands at a rapid-fire pace to talk about family, work, or plain-old gossip.

But that’s not what Robert Neal, 22, allegedly saw.

“He mistook the sign language for gang signs,” Sgt. Mark Yancey told ABC News. Neal allegedly grabbed a kitchen knife, and proceeded to overreact, stabbing Daniels several times, then running from the scene. Cops found him shortly after in nearby Elon, North Carolina.

Fortunately, Daniel survived thanks to a helicopter ride to the hospital. He remains in stable condition.

But what’s weird is that investigators don’t suspect Neal to be a gang member. Apparently, he’s just a random guy. Well, the “not a gang member” has been charged with assault with a deadly weapon with intent to kill. Bond was set at a half-million dollars, and he didn’t enter a plea at a Friday hearing.