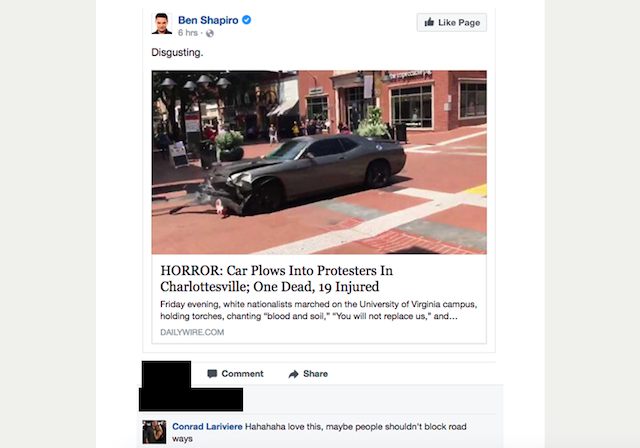 A Massachusetts police officer celebrated the incident that led to Heather Heyer‘s death at the hands of alleged domestic terrorist James Alex Fields, Jr. on social media just hours after it happened.

Patrolman Conrad Lariviere, with the Springfield Police Department, responded to a Facebook post categorizing the actions of the alleged Charlottesville terrorist as “Disgusting”.

Lariviere appeared to disagree. He wrote:

Immediately responding to his own comment, Lariviere took issue with an unknown user’s description of the alleged hit-and-run terrorist. He said, “How do you know he was a nazi scumbag? Stop being part of the problem.”

When commenters took Lariviere to task for his stunningly insensitive comments, he dug in, writing:

“[Y]ou ignorant brats live in fantasy land [sic] with the rest of America while I deal With [sic] the real danger.”

MassLive confirmed the digital exchanges and Lariviere’s employment with the officer himself. Lariviere admitted what he said, apologized for his “stupid” comments “about people blocking streets”, said he didn’t support murder, was not a racist and just wanted to be left alone.

That last request, however, is probably unlikely at this point.