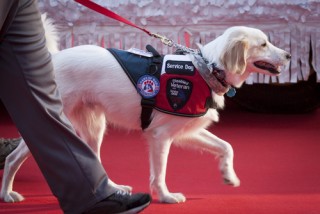 If you park in a handicap spot as an able-bodied person, you have to deal with the moral guilt and possible legal culpability that comes with it — it’s the type of “no harm, no foul” indiscretion that has Larry David’s name written all over it. Now, Colorado is calling out the immoral actors who try to pass their pooches off as service animals. It’s the new “stealing a handicap spot.”

Service animals are vital to the blind, veterans and many others. However, the prevalence of posers who acquire the credentials to label their dogs as service animals appears to have increased in recent years, to the point where it’s becoming problematic — admit it, you know someone who has done it; I do.

A new bill, just passed unanimously in Colorado’s House of Representatives, seeks to criminalize the act of intentionally misrepresenting a pet as a service animal for personal benefit. One of the more common misrepresentations is for convenience, so people can bring their dogs to shops, restaurants or other public places where they would otherwise be likely to be banned.

Rep. Daniel Kagan, a Democrat, who is sponsoring the legislation, explained that the bill would “make the misrepresentation an offense punishable in the same way that taking a disabled parking space is punishable — a $33 surcharge plus an increasing fine of:

On March 22, Kagan remarked to the House Judiciary Committee, “When people go about with a pet which they are passing off as a service animal falsely, they bring the entire program into disrepute. The persons that derive the worst effect of that are those with a legitimate need for a service animal.”

Angela Eaton, executive director of Canine Partners for the Rockies, echoed the same sentiment, saying that her clients find fake service dogs to be “a huge problem.”

“We’ve had calls from people who just want a vest so they can fly with their dog in the passenger section of an airplane,” Eaton said. “There are well-meaning people out there who feel the dog does provide a service, but they haven’t done the proper training. I hope this bill passes so it encourages people to seek that out.”

Advocates of the bill see three main issues with faux service pets. First, they de-legitimize real service animals. Second, animals that have not gone through the extensive training required may pose a threat to the public by creating misperceptions about behavior and ability. Third, it’s fraud — just like acting handicap for a benefit.

The bill will next make its way to the Senate where, if approved, it will go to the desk of Governor John Hickenlooper.