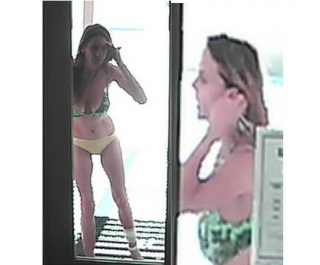 A bikini-clad woman allegedly robbed two homes in California earlier this month, and law enforcement officials are still trying to catch her. A Facebook post from the Santa Clarita Valley Sheriff’s Station on Tuesday included an image of the suspect taken from security video that caught her in the act, and asked the public for any information about her.

She allegedly hit two houses in the same day, stealing items from both. She was seen fleeing one of the locations in a tan colored car. She is described as being in her late 30s, about 5’5 and 120 lbs. The post was also clear to mention the yellow bikini bottom and green top that she’s wearing in the picture, although she’s probably put some clothes on by now.