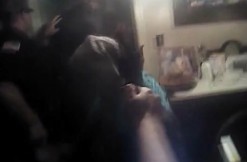 An 84-year-old woman in Muskogee, Oklahoma has threatened a lawsuit after she was pepper-sprayed by police.

Authorities told Fox 23 they were chasing Geneva Smith’s son when she ran into her house. The man refused to come out of the house when told, police said. That’s when they busted in, tased him, and Smith got a literal eyeful straight from a can of pepper-spray. Police had previously told her to turn around.

You can watch the body-cam video here:

Investigation into the incident is going, but Smith, who said she had to go to the hospital, is considering a lawsuit.

“And I just came out and asked them what was going on, and they just pepper-sprayed me,” she told Fox 23.

Muskogee Police Chief Rex Eskridge said he supplied the body-cam footage in a gesture of transparency.