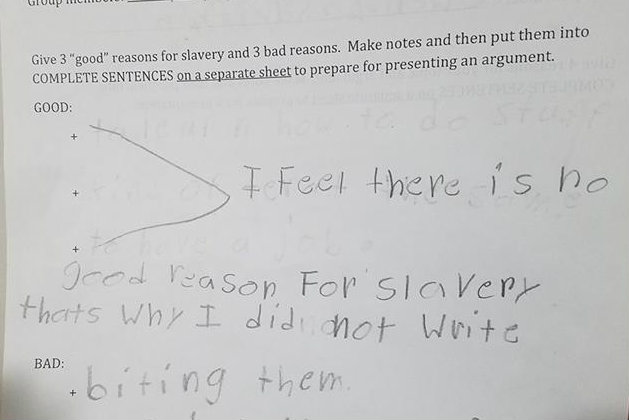 Our Redeemer Lutheran School in Wisconsin recently had to apologize after a teacher gave a decidedly improper assignment to 4th grade English students: Give 3 reasons why slavery was “good,” and 3 reasons why it was bad. This did not play well with at least one parent and her son, according to a Fox 6 Now report.

The assignment was sent out Monday. Parent Trameka Brown-Berry, who is black and whose 9-year-old attends the class, posted the lesson to Facebook.

“I feel there is no good reason for slavery,” her son wrote.

Brown-Berry told Fox 6 Now that the lesson was “offensive and insensitive,” later saying that “Not only was my son in an awful position, but also the students who weren’t black because it’s that sort of mentality of not being able to see from another’s perspective, and only seeing through your lens, that’s what’s dangerous. That’s what keeps racism going.”

Principal Jim Van Dellen told the outlet that this was assignment was a mistake, though he declined to participate in an on camera interview. In a letter addressed to parents, he said that lesson was no longer part of the curriculum, and that the lesson was not “clearly explained to students and their parents.”

“We understand that, as presented, the words used showed a lack of sensitivity and were offensive,” he wrote. “The purpose of the assignment was not, in any way, to have students argue that ANY slavery is acceptable-a concept that goes against our core values and beliefs about the equality and worth of people of all races.”

The actual text in the lesson read:

Give 3 “good” reasons for slavery and 3 bad reasons. Make notes and then put them into COMPLETE SENTENCES on a separate sheet to prepare for presenting an argument.