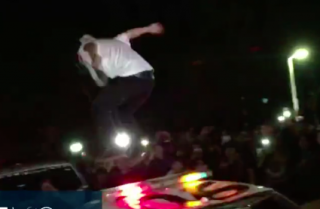 A protest outside an amphitheater where Donald Trump was speaking in Orange County, California suddenly turned violent. Protesters smashed a police car, and 20 people were arrested.

The Orange County Sheriff’s Department reported on Twitter that there were no major injuries, and the crowd was dispersed by 11 p.m.

In this video, you can see protesters jumping on a squad car, and hundreds of people blocking the street in Costa Mesa, which is not far from Los Angeles.

NBC News reports that fights broke out in the crowd, and some could be heard yelling, “Racists go home!”

Protesters just wrecked this cop car. Bashed in windows, jumping on top of it. pic.twitter.com/bZ7vmg0lhW

Police were in riot gear to break up the crowds. No one was seriously injured.