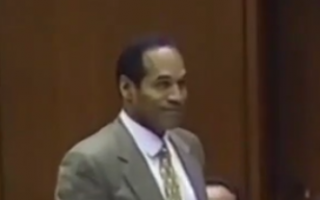 Have you ever sat at home after binge-watching Making a Murderer and The People v. O.J. Simpson and thought “Someone should really make a combination of these!” No? Well you’re getting one anyway. In what I assure you is not an April Fool’s joke, The Investigation Discovery Channel picked up the rights to a six-part documentary series called Hard Evidence: O.J. is Innocent.

It all came to pass when Charlie Sheen (naturally) met with investigator William C. Dear, author of 2012’s O.J. is Innocent and I Can Prove It. Apparently the book didn’t quite prove it enough, because now he’s developing it to convince a television audience. In fact, this is Dear’s third bite of the O.J. apple, as the 2012 book was just a longer version of his 2001 self-published work, O.J. is Guilty but Not of Murder (available for only $89.50 on Amazon!). Sheen introduced Dear to his father, 9/11 truther Martin Sheen, who is now narrating and executive producing the show. Both books say — SPOILER ALERT — that O.J.’s son Jason was behind the murders, and Juice only got involved to protect him.

Dear, whose television credits include being an investigator on Alien Autopsy: Fact or Fiction, used some…unorthodox methods in proving his case. According to Tony Ortega’s review of the 2001 book for the New Times Los Angeles (reprinted here by the Village Voice), Dear dressed up as a doctor and walked around Cedars-Sinai Medical Center for two weeks, getting chummy with a file clerk, before asking her for “all the records you have on a patient, J. Lamar Simpson.” Dear claims he eventually realized how awful — and possibly illegal — that was, and says he didn’t take the files.

How did Investigation Discovery get involved with this? This channel is part of the same company, Discovery Communications, that is responsible for programming like Mythbusters and Shark Week! Have they forgotten the same evidence of O.J.’s guilt that Dear ignores? You know, the DNA, the loss at the civil trial, Simpson’s own book where he literally describes how he would have killed his wife?

The difference between this and related programs is that 1) Making a Murderer draws attention to a case that wasn’t constantly on television for a year when it was going on, and 2) The People v. O.J. Simpson, while arguably trashy, takes a fun look back on a case the country was obsessed with, without spewing ridiculous conspiracy theories.

Then again, what do I know? I haven’t seen it. Maybe Dear knows something the rest of us don’t. Maybe I’ll hop on board the O.J. bandwagon and proclaim his innocence as well. But probably not. The series is expected to debut early next year.