Why Would This Smart, Well-Educated Attorney Want to be Next Bachelorette ? 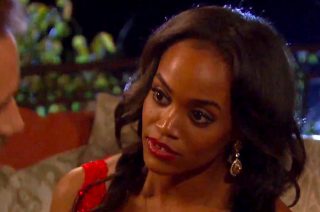 ABC announced that Rachel Lindsay will be the first ever black Bachelorette in a season that will premiere on May 22th. You might have noticed her as a contestant on The Bachelor this season. The Dallas attorney caught our attention because why would such a highly qualified and accomplished young woman such as Lindsay subject herself to the circus that is The Bachelor?

She’s got a pretty impressive legal pedigree. Lindsay, 31, a Marquette University Law School graduate, received her bachelor’s degree in kinesiology and sports management from the University of Texas in Austin. She has worked in various positions related to sports, entertainment, and media relations, in addition to working as an intern in the public defender’s office in Milwaukee and as a legal intern with the Milwaukee Bucks. After graduating from Marquette, Rachel worked as an attorney with Brown & Hofmeister, LLP as well as the Willis Law Group before moving onto her current position as a civil litigation attorney with Cooper & Scully, P.C.  Lindsay is admitted to practice law in Texas, Wisconsin and the U.S. District Court for the Northern District of Texas.  Surely not the predictable candidate for a run of The Bachelor.

So why the need to appear on the primetime show? It seems that while she is proud of her accomplishments, Lindsey believes all of the time spent on her professional life may have ultimately taken a toll on her love life.  In her profile, Lindsay states that focusing too much on her career is her biggest regret and believes that might have led her to miss out on her chance at finding love.

If it’s not about love,  perhaps Lindsay is also hoping to tap into some of the celebrity success of former contestants like attorney Andi Dorfman.  Dorfman, a former Assistant District Attorney from Fulton County, Georgia, appeared on season eighteen of The Bachelor and has since become a well-known television personality.  She was even chosen as The Bachelorette for the show’s tenth season.

Bachelor Nick Viall was also clearly swayed by Lindsay, as he awarded her with the First Impression Rose, the first time for an African-American contestant during the history of the show. Lindsay lists “graduating law school and passing the bar (first time)” as her greatest achievement to date.

[image via screen grab The Bachelor/ABC]