Comedian Katt Williams Will be Charged for Sucker Punching Teen 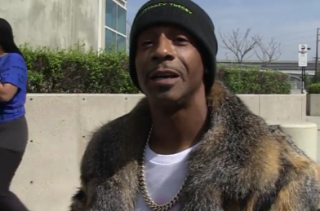 Days after video caught Katt Williams punching a teenager (and promptly getting thrown to the ground and choked in response), the comedian is expected to turn himself in to the police in Gainesville, Georgia, the New York Daily News reported.

Sgt. Kevin Holbrook told the Daily News that Williams, 42, will be charged with disorderly conduct after instigating the physical altercation with Luke Wash, 17. This is just the latest in a rash of violent incidents Williams has been linked to this year, and it won’t be his first arrest. In fact, this incident violated conditions of the comic’s bond from a previous charge, and that bond will be revoked due to this incident, Holbrook said.

It should be difficult for Williams to mount much of a defense, considering he already discussed the fight on stage during a performance in Brooklyn. During his show, Williams acknowledged that he punched Wash, and said he wanted to give him a “bloody mouth” to teach him a lesson for mouthing off to an adult.