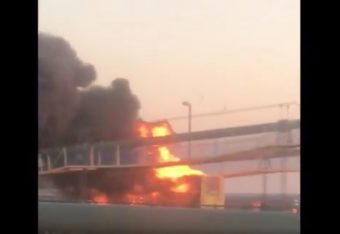 The truck was en route to Philadelphia as part of tour of East Coast colleges when it burst into flames, according to nbcphiladelphia.com.  Smoke could be seen from miles away and two lanes of the highway were while as firefighters worked to put out the flames.

The owner of Weed World Candies told the news station at least $50,000 in merchandise was destroyed, but the five employees inside the truck were uninjured.  Weed World Candies was founded in 1999 to promote legalization of marijuana.

Firefighters say they are still investigating the cause of the blaze.