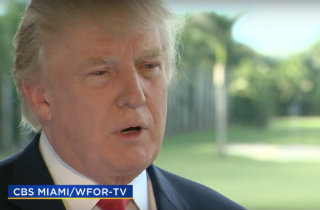 If a new interview is any indication, Donald Trump still appears to be a bit confused about how defamation and freedom of the press work. This in spite of his repeated pledges to overhaul the various related laws in his favor. A discussion of the press was the most newsworthy portion of an interview released on Sunday by WFOR-TV (Miami’s CBS affiliate), w conducted by Jim DeFede at his Trump National resort in Doral, Florida:

DEFEDE: Again you’ve brought up the press. In the past you have talked about wanting to amend laws to and rework things to make it easier to sue do you think there is too much protection allowed in the first amendment?

TRUMP: Well in England they have a system where you can actually sue if someone says something wrong. Our press is allowed to say whatever they want and get away with it. And i think we should go to a system where if they do something wrong… I’m a big believer tremendous believer of the freedom of the press. Nobody believes it stronger than me but if they make terrible, terrible mistakes and those mistakes are made on purpose to injure people. I’m not just talking about me I’m talking anybody else then yes, i think you should have the ability to sue them.

DEFEDE: So you’d like the laws to be closer to what they have in England?

TRUMP: Well, in England you have a good chance of winning. And deals are made and apologies are made. Over here they don’t have to apologize. They can say anything they want about you or me and there doesn’t have to be any apology. England has a system where if they are wrong things happen.

It was back in February when Trump first mentioned that his platform included a plan to “open up our libel laws so when they write purposely negative and horrible and false articles, we can sue them and win lots of money.” One month later, his meeting with the Washington Post Editorial Board included further discussion on that topic along the same lines.

In the 1964 U.S. Supreme Court decision New York Times Co. v. Sullivan, it was ruled that when dealing with public figures, false statements were legally actionable only if the statements were made with actual malice, meaning that they were known to be false or stated with a reckless disregard for the truth. The English model alluded to in the Miami interview lacks the public figure distinctions.

In other words, if a member of the press makes something up about you, in the United States then yes, you “can sue them and win lots of money” right now. There’s no change required.