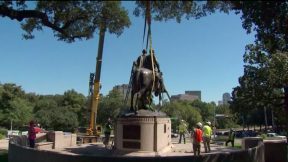 After a nearly unanimous vote by the Dallas City Council, a large statue of Confederate General Robert E. Lee is being immediately removed from Lee Park in the Turtle Creek neighborhood of Texas’ third-largest city.

The resolution was passed after being introduced by three of the city’s four black councilmembers. It is the latest in a series of Confederate statues to be removed in the aftermath of neo-Nazi violence in Charlottesville, Virginia last month.

The Robert E. Lee statue will be stored at Hensley Field, a city storage facility, while a task force decides what to do with it in the longterm.