WATCH: Cops Publicly Shame Man After He Tweets Himself Spitting on Squad Car 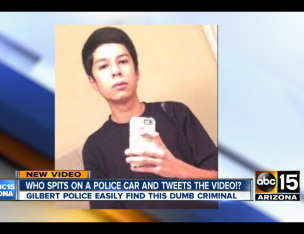 Police in Arizona decided to have a little fun with a man who decided to tweet a video of himself spitting on a police cruiser.  The Gilbert Police Department responded to the alleged spitter, Andrew Coronado, with a tweet of their own under the hashtag #americasdumbestcriminals.

Andrew, thanks for the video with the evidence against you! https://t.co/f0w3wE6pzn#americasdumbestcriminalspic.twitter.com/01Okv2ZTYm

In a later tweet, the Gilbert police said they have no plans to file any charges over the incident.  They said a public shaming is sufficient under these circumstances.

@MWhite__ it’s just public shaming. We are not doing anything else about it.

According to ABC 15, Coronado seems to have gotten the message because the video of the alleged incident was taken down shortly thereafter.