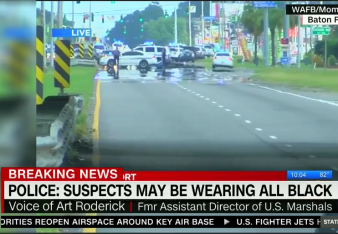 Authorities on Monday described the attack in Baton Rouge that left three police officers dead and another three injured as a deliberately planned ambush targeted at police officers.  According to one report, investigators have obtained a video recording of the incident that helped lead them to this conclusion.

“We do believe he was targeting officers, and he definitely did ambush these officers that he shot,” Louisiana State Police spokesman Lt. J.B. Slaton said Monday morning, according to the Washington Post.

“So we’re finding out somebody that was methodical and planning and really an outright murderer,” Baton Rouge Mayor Kip Holden told CNN in an interview on Monday morning.  “Somebody who knew the movements of police officers, that knew how to position them so they could be within range of then killing them.”

In a separate CNN report that aired later on Monday morning, correspondent Drew Griffin reported that his sources told him the attack took place at a convenience store where cops regularly stopped for coffee as they started the morning shift.  The store was approximately one mile from the Baton Rouge police headquarters. CNN also reported that investigators had reviewed a video recording of the incident that shows the attack “was a meticulous, planned approach towards police officers.”

As the report states, the source did not clarify where investigators obtained the video or from what perspective the video was shot.  However, on Monday afternoon authorities held a press conference where they announced surveillance video was obtained from what appears to be nearby businesses captured the shooting.

Col. Michael Edmonson, Superintendent of the Louisiana State Police, said at the press conference that the video made it clear that officers were “assassinated.”  He also said they believe the shooter staked out multiple areas around the city in the days before the attack, in an effort to find the best location to attack police.  Using still frames from the video and satellite imagery of the area, Col. Edmonson then provided a detailed account of what happened on Sunday.

After seeing two officers already down, a sheriff’s deputy left cover in an attempt to render aid to the fallen cops.  As he approached the injured officers, the shooter came around the corner of a building and killed the deputy.  The suspect then noticed one of the injured officers was still moving so he fired at least two more shots at nearly point blank range at the wounded officer to ensure he was killed.  The suspect then retreated towards his vehicle where he shot another sheriff’s deputy who was seated in his cruiser.  That deputy is currently fighting for his life in the hospital.  The shooter also shot two additional law enforcement personnel before he was finally killed by the Baton Rouge city police SWAT team.

Baton Rouge Police Chief Carl Dabadie said at the press conference that it is believed that the shooter was planning to head to another location to carry out another attack, but the SWAT team prevented it from happening.

The deadly attack on Sunday unfolded over the course of just eight minutes near a convenience store in Baton Rouge.  The first reports of a man carrying a rifle went out on the police radio at approximately 8:40 AM CDT.  Officers responded to the scene and within minutes reports of shots fired were heard over the police radios, and shortly thereafter came reports of officers down.  The shooter was reportedly killed by Baton Rogue city police SWAT team at approximately 8:48 AM CDT.

Matthew Gerald, 41, and Montrell Jackson, 32, both officers with the Baton Rouge police department were killed in the attack. East Baton Rouge Parish Sheriff’s Deputy Brad Garafola, 45, was the deputy who was killed while attempting to render aid to the fallen officers.