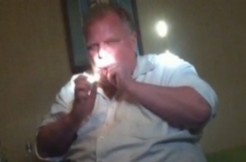 The last years of Rob Ford’s life were…memorable. He became mayor of Toronto, Canada in 2010. Pretty nice gig, but his term of office was marred a collection of bizarre stories and media appearances.

What started it all was an allegation from May 2013. Gawker editor John Cook saw and wrote about a video of Ford smoking crack cocaine. Problem was, he couldn’t publish the footage online. Apparently, sources wanted $200,000 for the video.

So from then on, Ford was in a he-said, he said with the media until he finally admitted to using crack in November 2013.

The footage was tied up in an extortion case against Ford’s former driver Alexander Lisi. But now, with charges against Lisi dropped on Thursday, The Global and Mail managed to get their hands on it. It is available above.

Ford passed away from cancer on March 21, 2016 at age 46. He had, quite miraculously, gotten himself elected to the Toronto City Council despite public concerns about his health, and the admission that he’d used crack cocaine.
–