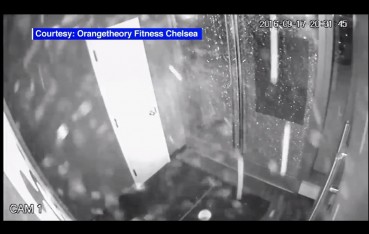 Surveillance video from a Chelsea fitness center near the center of the explosion late Saturday in Manhattan shows the strength of the blast that injured dozens and the chaos that followed.

Reports indicate the video was first aired by overnight by MSNBC and then picked up by numerous other outlets.

According to CNN, at least 29 people were injured, including one critically.  The blast went off around 8:30 p.m. local time in the Chelsea neighborhood.  Investigators believe it was an “intentional act.”  The report states investigators are looking for a man seen near the area just prior to when the explosion went off.  They have not said whether that individual is a suspect at this time.

It was also revealed that there was a second explosive device found nearby the first explosion scene.   It has been described as a pressure cooker bomb with a cellphone attached.

A pipe bomb also exposed in New Jersey on Saturday just prior to a 5K Marine charity run.  There were no injuries in that explosion, in large part because investigators say the start of the race was delayed due to late sign-ins.

CNN’s Jake Tapper reported on Sunday morning that investigators are shipping the New Jersey bomb to a lab to determine whether it has any connection to the New York City bombs.

Pix 11 News first reported on a possible manifesto from the self-proclaimed NY Bomber that appeared overnight on Tumblr.

Investigators, including the FBI, are currently working to determine the legitimacy of the postings, according to the Washington Post.

The individual(s) behind the Tumblr posting claims the reason for the attack on Saturday was to bring attention to the issues faced by individuals in the LGBTQ+ community.

The original posting was taken offline shortly after it was picked up by the media.