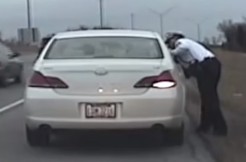 Oh, look, a candidate’s bad history is being used to hurt him. Infamous Milwaukee Sheriff David Clarke posted a YouTube video to his Twitter account Wednesday, in which Republican presidential hopeful and Ohio Gov. John Kasich called a cop an idiot.

To be specific, Kasich called the officer an idiot several times during a speech for the Ohio Environmental Protection Agency in 2011. There, he complained about being pulled over in 2008 for passing too close to an emergency vehicle. Kasich, who was doing campaign fundraising for state Republicans at the time, was ordered to go to court.

Chickens come home to roost, and someone found what seems to be the dashcam footage of the stop. They put the video together with that of the speech, and that’s where Sheriff David Clarke comes in.

https://t.co/IHR5wLWIev This rat bastard @JohnKasich lied about this cop’s treatment of him as a lack of respect. Called the cop an idiot.

So Clarke probably wouldn’t vote for Kasich if given the chance.

The traffic stop isn’t a new story. The speech got him in trouble with local law enforcement in 2011 amid political fighting over the power of police unions.

“I never thought I’d see the day when a governor of this great state would call a police officer an ‘idiot’ for simply doing his job,” Ohio Democratic Party Chairman Chris Redfern said in a 2011 statement, according to Fox News. “Even worse, he wants to eliminate the right of law enforcement workers to collectively bargain to provide a better life for their families.”

A spokesperson for Kasich told Fox News that the governor privately met with the officer, and apologized.

As for Clarke, he’s the kind of person who gets attention being incendiary. An African-American, he has said that Democrats keep black people “enslaved,” and that Black Lives Matter Protesters will probably be working with ISIS one day.