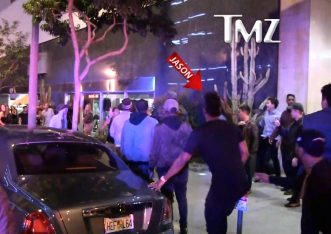 Multi-platinum recording artist Jason Derulo reportedly found himself at the center of a massive brawl outside a popular Los Angeles nightclub early on Sunday morning.

According to the celebrity gossip website TMZ, the fight broke out around 2:00 a.m. outside the Bootsy Bellows nightclub on the famous Sunset Strip in West Hollywood, CA.

Video taken at the scene appears to show DeRulo initially avoiding involvement in fight.  However, something got his attention and he suddenly jumped right into the middle of the melee.

L.A. County sheriff’s deputies quickly responded to the scene and some were armed with weapons that reportedly contained non-lethal beanbag rounds.

No shots were fired and the deputies quickly restored order amid the chaotic scene.

According to the Bootsy Bellows Instagram page, the nightclub was hosting an American Music Awards pre-party on Saturday night that featured an appearance by Derulo.

It’s going down tonight with @jasonderulo. | Come by for an @amas pre party. #BootsyBellows

Deputies say they are unsure of what started the brawl.  As of early Sunday morning, no arrests have been made.