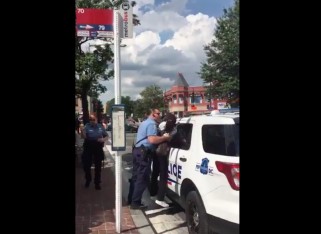 Police in Washington, D.C. are reportedly conducting an investigation after a video was posted to Twitter on Monday that appears to show an officer pinning an African American woman up against a police vehicle.

So this just happened. I’m TIRED. he literally hopped out and did this immediately to her. No CONVO. Dawg. WTF pic.twitter.com/tf1HpF78up

The Washington Post reports the incident occurred on Monday near Howard University.  A spokeswoman from the Washington, D.C. police department told the newspaper an investigation is currently underway.

“We’ve been made aware of the video and contacted their commanding officer,” spokeswoman Rachel Schaerr told the newspaper.

Fox 5 managed to track down the woman.  She gave a brief interview, telling the reporter she believes the officer thought she was a threat because she was involved in an argument with a man when the officer approached her.