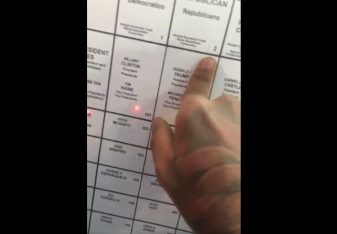 Some Republican voters in Pennsylvania have reported instances of vote flipping on touchscreen voting machines where an attempt touch the Donald Trump section actually registers a vote for Hillary Clinton.

🚨BREAKING: Machine Refuses to Allow Vote For Trump in Pennsylvania!!

The reported issues apparently got the attention of Trump himself, according to NBC News.

“There are reports that when people vote for Republicans, the entire ticket switches over to Democrats. You’ve seen that. It’s happening at various places today,” Trump said, according to NBC.  “We have to be careful, we have to see what it is.”

It is unclear how widespread the problem may be, but it is potentially worrisome because it is occurring on machines that do not have a paper trail.  However, it could simply be a calibration issue with the touchscreen.

Luzerne County District Attorney Stefanie Salavantis told the news outlet her office was aware of the reports and investigators were looking into the problem.

“The District Attorney’s office is seeking further information from the Bureau of Elections; however, at this point, information received so far does not indicate criminal behavior,” Salavantis said.