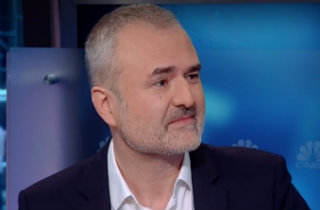 On Tuesday, Gawker founder Nick Denton appeared on CNBC’s “Squawk Box” to discuss the state of his company in light of his personal bankruptcy filing and their other assorted legal entanglements. During the course of the interview, he was asked an obvious question, but it resulted in an interesting answer: What would he say to Peter Thiel, the billionaire funding many of the lawsuits against Gawker, if he happened to stroll into the studio?

“You bankrupted the company. You bankrupted me personally,” Denton said. Then he posited a question for Thiel: “Why are you still going after Sam Biddle, a journalist? John Cook, our executive editor? Why are you targeting individual journalists because you’re upset with the coverage?”

Denton had another interesting answer, albeit a cryptic one, when asked if he’s spoken to Thiel privately since the revelation that he was the benefactor of Hulk Hogan and others suing Gawker. His answer? “If I had, I couldn’t say.” Host Andrew Ross Sorkin was somewhat taken aback by the response and tried to get Denton to elaborate, but Denton maintained that he could not say more than ‘If I had, I couldn’t say.”