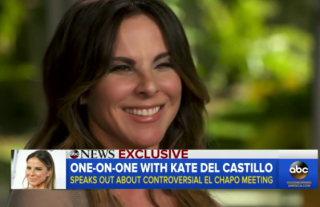 Kate Del Castillo, the Mexican actress who helped set up the meeting between Sean Penn and drug lord Joaquin “El Chapo” Guzman that eventually led to Guzman’s capture, broke her silence in a 20/20 interview with Diane Sawyer. Sawyer went on Good Morning American on Friday to discuss the conversation, which will air in full Friday night. “This is one of the wildest stories I have ever covered,” Sawyer said.

While authorities were hunting El Chapo, it was Del Castillo and Penn who were able to track him down for Penn to conduct an interview. Sawyer showed clips of Del Castillo discussing how it may have been El Chapo’s possible crush on a fictional character she plays on television that made it happen. She also gave her thoughts about Penn. Del Castillo said she was hurt and felt like Penn duped her into brokering the meeting by saying he wanted to make a movie with her about El Chapo. “I think he was never interested in the movie,” Del Castillo said. “I’m angry at myself because I believe in people, and I didn’t know Sean Penn.”