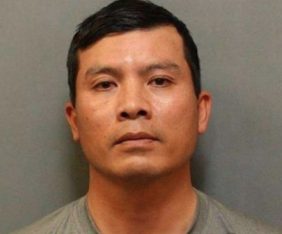 A Texas man was arrested and charged with aggravated assault with a deadly weapon after police say he whacked another golfer over the head with a golf club.

It all allegedly happened on the 16th hole of a golf course in Carrollton, TX when another group of players hit the ball onto the green where 27-year-old Michael Plumlee was putting out with his group.

Police say Plumlee responded by throwing the ball off the green, according to The Dallas Morning News. That apparently angered the group playing behind him, so they approached Plumlee’s group on the green and an altercation allegedly took place.

Police say during the altercation 42-year-old Kevin Sivilay hit Plumlee on the back of head with a golf club, possibly knocking him unconscious for a brief time. After Plumlee hit the ground, Sivilay is accused of striking him two more times with his gold club across the back.

Plumlee’s stepmother told a local television reporter her husband had broken ribs and may have suffered brain damage.  She also shared gruesome pictures of his injuries taken at the hospital. Police say they are continuing to investigate the matter and may file additional charges in the case.