Like Something Out of a Movie, Cop Saves Man on Tracks Right Before Train Arrives (Video) 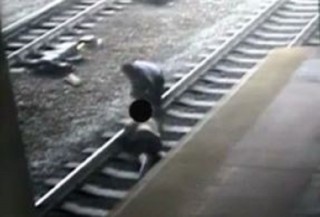 Security footage from a New Jersey train station shows a NJ Transit police officer making an incredible rescue, pulling an unidentified man off the railroad tracks an instant before an oncoming train would have reached him.

Officer Victor Ortiz was called to the scene Friday morning, after a man was said to be engaged in a confrontation. The man got off of a train at the Secaucus Junction stop, and Ortiz pursued him along the platform and then the tracks. The unknown individual then placed himself on the tracks and wouldn’t move. Ortiz can be seen having difficulty removing him from the tracks, but ultimately succeeded, just in the nick of time.