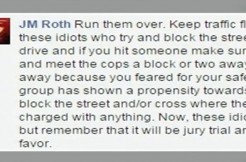 A Minnesota police officer was put on leave while he’s investigated for a twisted Facebook post he allegedly wrote.

“Run them over. Keep traffic flowing and don’t slow down for any of these idiots who try and block the streets,” the post said. It went on to say how readers could avoid a jury conviction.

Andrew Henderson said he discovered the post, by a Facebook user called “JM Roth,” early morning Saturday. He took screenshots of the post, and recorded himself calling the St. Paul police to report it. He thinks the writer is Sgt. Jeff Rothecker, a 20-year veteran of the force:

St. Paul cops are checking this out. In a statement, they called the post “offensive, disappointing, concerning and does not in any way—or align with—the views, values and practices of the Saint Paul Police Department.” If the post is found to be written by an officer, they promised they will punish this person thoroughly. But Minnesota law keeps them from giving specific info on the ongoing investigation, so they’ll stay pretty quiet for now.  No word on any potential criminal charges.

Also staying pretty quiet is the St. Paul Police Federation, which represents city cops. “We know that there is an investigation,” Attorney Chris Wachtler told CBS Minnesota. “We will let the process play out.”