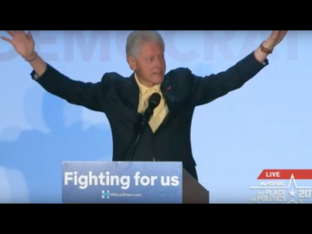 Former President Bill Clinton provided a rather lively defense of his wife, Hillary Clinton, at campaign stop in Kokomo, IN on Saturday.  When the topic of Hillary Clinton’s use of a private server while serving as Secretary of State was brought up, the former president dismissed the FBI’s involvement, and called the entire episode “a game” concocted by Hillary’s opponents.

As you can see at the beginning of the clip, the former president is discussing how Hillary turned over some 55,000 printed pages of e-mails to State after she left.  The former president gives the impression that Hillary did this in the name of transparency and openness by trotting out the line, “Nobody had ever done that before” (A similar line used by Democratic Senator Chuck Schumer last summer was ruled mostly false by politifact).

What President Clinton neglected to mention was no other secretary of state has had their own private e-mail server with which to conduct State business.  He also failed to mention she deleted over 30,000 emails that she unilaterally determined were “personal.”

President Clinton then transitioned to the next Clinton defense — the claim that all emails were determined to be classified after the fact— therefore, Hillary could not have know she was doing wrong.

Despite strong evidence to the contrary, President Clinton sticks with the defense and uses an analogy to drive his point home:

“If you’re driving in a 50 mile-an-hour zone, and a police officer pulls you over when you’re driving 40, and says ‘I’m sorry, I’ve got to give you a ticket because you know the speed limit here should be 35, and you should have known it,’” Clinton told the audience.

Well, as the Daily Caller notes, Clinton’s analogy fail, miserably. First, Hillary Clinton signed form SF312 in which she acknowledged receiving classified information indoctrination training, including how to identify classified material, regardless of marking. Her oath also imposed a duty on Clinton to ensure information that may be potentially classified later and/or information currently working its way through the classification process was protected.

Furthermore, Clinton also received an additional warning form the NSA about the difficulties in securing blackberry devices. Nonetheless, it appears that Hillary and the majority of her inner circle continued to use Blackberries as their primary email even after the NSA warning.

Former President Clinton ends this portion of the speech by mocking the whole e-mail investigation.

Clinton says, “So, everybody is all “breathless about [her e-mails],” while flailing his arms widely.

And to reaffirm his points and minimize critics one more time, the former president drives its home with the campaign line, “Look, this is a game.”

It is doubtful the FBI Agents and other investigators working tirelessly on a resolution feel the same way.