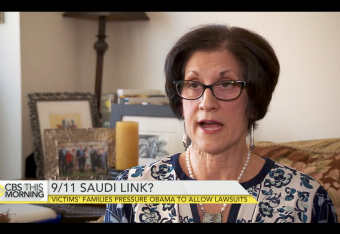 As President Barack Obama prepares to leave for a trip to Saudi Arabia on Tuesday, he is facing new pressure from the families of 9/11 victims who want him to support legislation that would allow them to sue the Saudi government over the 9/11 terror attacks.  Prior efforts by families of 9/11 victims to bring lawsuits against Saudi Arabia have failed because foreign governments are generally immune from lawsuits in the United States.

Congress is considering new legislation that would permit lawsuits against countries that “contribute material support or resources” for “acts of terrorism,” according to CBS News.  Saudi Arabia recently threatened to sell off billions of dollars in U.S. assets if the proposed bill is signed into law and is reportedly lobbying hard to have the bill killed.  Meanwhile, the Obama Administration has also warned of potential overseas consequences and retaliatory acts should the proposed legislation get through Congress.

All of this has some families of 9/11 victims very upset, including Loria Van Auken, whose husband worked above the impacted zone on the 105th floor of the World Trade Center’s North Tower and was killed in the attacks.

“If someone you loved was murdered and the person was just able to go away Scott free, would you be okay with that? I don’t think anybody would,” Van Auken said in an interview with CBS News.  Van Auken feels strongly that at least some in the Saudi government provided far more support to the 9/11 hijackers than has been publicly admitted.

Van Auken also said the threats of retaliation from Saudi Arabia “feels like blackmail” and she questioned why President Obama would stand for it.

“The government, the president is siding with Saudi Arabia over the 9/11 families,” Van Auken said.

The Saudi government’s role in 9/11 is receiving renewed attention in light of a 60 Minutes report about a classified portion of a joint-congressional report on the attacks that has become known as the “28 pages.”  Government officials who have read the 28 pages say they provide evidence that some Saudi government officials provided support to at least two of the 9/11 hijackers when they entered the United States prior to the attacks.

The Saudi government has long denied that it played any role in the 9/11 attacks and released this statement to CBS News:

The 9/11 commission confirmed that there is no evidence that the government of Saudi Arabia supported or funded Al Qaeda.

Van Auken, however, is not convinced and hopes President Obama will declassify and release the 28 pages so the public can make their own determination.

Last week, former Florida senator Bob Graham, who has push for the release of the 28 pages, said he received word from the White House that a decision would be made on whether to release the information in the next 60-days.