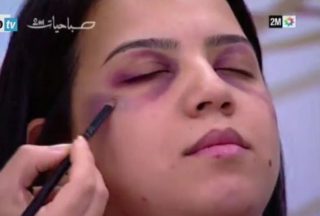 A makeover segment on Moroccan state-sponsored TV is drawing global controversy for providing women with makeup tips for hiding the effects of domestic violence. The show, “Sabahiyat,” on Morocco’s Channel 2M, featured a woman with reportedly artificial bruises around her face, receiving a cosmetic treatment by another woman who explained her techniques to a viewing audience.

The host provided tips in Arabic, such as, “Make sure to use loose powder to fix the makeup so if you have to work throughout the day, the bruises don’t show,” and to use foundation that has yellow, because “[i]f you use the white one, your red punch marks will always show.”

Moroccan women were horrified by the segment, which normalized domestic violence as a matter of daily life. Thousands of people signed a petition calling for the station to apologize and face sanctions. The petition says:

As Moroccan women and as feminist activists in Morocco, and in the name of all Moroccan people, we denounce the message of normalization with violence against women. We demand severe sanctions against this show, “Sabahiyat”, and the channel 2M … Do not cover domestic violence with makeup, condemn the aggressor!

Reactions to the show have been all over social media.

The program first aired on November 23, two days before the UN’s International Day for the Elimination of Violence Against Women. It has since been removed from the station’s website.

The host, Lilia Mouline, told Morocco World News that the program was not an endorsement of domestic abuse. “We are here to provide solutions to these women who, for a period of 2 to 3 weeks, are putting their social life aside while their wounds heal,” Mouline said. “These women have already been subjected to moral humiliation and do not need to also have others looking at them.”

The station acknowledge their error in a Facebook post, saying, “the management believes that this section is completely inappropriate and has an editorial error of judgement in view of the sensitivity and the gravity of the subject of violence against women.”