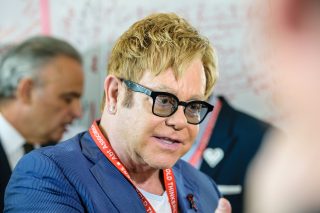 Yesterday, Anthony Scaramucci, the vice chair of the presidential inaugural committee, told BBC’s “HARDtalk” that Elton John would be performing on the national mall during Donald Trump’s presidential inauguration. That seemed weird, given that Elton John was vocal Hillary supporter during the campaign, and because (to seriously understate things) the singer’s politics don’t exactly line up with our president-elect’s.

When Scaramucci explained that Elton John, an icon of gay culture, would be performing to demonstrate the incoming Trump administration’s dedication to LGBT rights, things sounded a bit better. “This will be the first American president in U.S. history that enters the White House with a pro-gay rights stance,” remarked Scaramucci, who is also on the executive committee for Trump’s transition team. And wow. That would be amazing if it were actually true. The only problem is that it’s not true – not even a little bit. Not the part about Elton John performing, and certainly not the part about the incoming administration having a “pro-gay rights stance.”

When Elton John’s people were asked about his plans for this purportedly groundbreaking performance, John’s rep clarified with a mild,“Elton will not be performing at Trump’s inauguration.” Maybe it’s me, but I imagine that Elton’s own response to the inauguration committee was considerably more colorful.

I know Trump has a habit of changing positions on critical issues, but his people might want to take a gander at that whole GOP party platform document that he was elected to implement. Among other absurd goals (such as the combatting of internet pornography based on its constituting a public health crisis), the platform supports gay “conversion therapy” for children who identify as LGBT, and opposes same-sex marriage. And there’s also the minor issue of Vice-President Elect Pence’s having been the poster-governor for homophobia as he has been a vocal proponent of state “RFRA” laws that encourage individuals and businesses to discriminate against LGBTs.

Gay rights may be another item on the growing list of issues about which Trump himself only began to seriously consider after the election – but he’s probably going to have to do more than say he likes “Tiny Dancer” before he becomes the new hero of LGBTs. Truth be told, Donald Trump and Elton John have had a friendly relationship over the years.  After Elton John married his now-husband David Furnish, Trump posted the following on a blog:

Elton John was also famously invited to Donald and Melania Trump’s ostentatious wedding, along with many other celebrities.  Then again, Donald Trump also hung around with the Clintons before the 2016 election; friendship can be fickle that way.

It would certainly be wonderful if President Trump were to publicly champion his purportedly “pro-gay rights stance.” But even if Trump decides to drape the White House in rainbow flags, it would be a good idea if he did so without defaming Elton John. Scaramucci’s false public statement that Elton John was planning to perform was presented as one of fact. Given the political climate in our country right now, it’s hardly a stretch to imagine that many of Elton John’s fans would be disgusted by his choice to perform at the inauguration, and that their disgust would hit Elton in his sequined pocketbook. If Elton John were a private individual, such facts might well create a viable defamation claim against Scaramucci and the Trump transition team. Of course, because the singer is a public figure, a defamation claim would fail unless he could prove that the statements were made with “actual malice.” If those words sound familiar, it’s because they’re the ones Trump has long advocated to remove from the legal requirements for a defamation case, as part of “opening up” libel laws.

Editor’s Note: This article has been updated to reflect the fact that Elton John and Donald Trump had a friendly relationship prior to Trump’s presidential campaign.