The Trump DOJ’s First Big Target Could Be Planned Parenthood 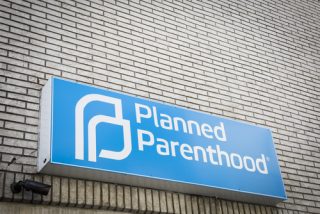 Remember back during the presidential debate, when Donald Trump said that after he won the election, Roe v. Wade would be “automatically” reversed? Well, since that idea is unlikely to work as seamlessly as he’d promised, Trump seems to be handing a substitute gift to the pro-life brigade. Instead of an overturned Supreme Court verdict, President Trump’s administration could end up delivering a sweeping investigation and criminal prosecution of Planned Parenthood.

Let me explain. Yesterday, the Senate Judiciary Committee ( the “SJC”) released a 547-page report demanding that the Justice Department find evidence that Planned Parenthood, its affiliates, and several medical research companies illegally sold tissue from aborted fetuses.  The SJC is led by 82-year-old Republican Senator Chuck Grassley of Iowa, who has gotten pretty comfy in his senate seat over the 36 years during which he’s occupied it. The report entitled “Human Fetal Tissue Research: Context and Controversy” is something of a first-day-at-the-office gift to Jeff Sessions, Trump’s appointee for Attorney General. After he is confirmed, Sessions is widely expected to take up the SJC’s gauntlet and spearhead the war on Planned Parenthood; such a move would be wildly popular among conservatives, and would keep alive a set of allegations that surfaced last summer.

Those allegations, made public via heavily-edited and later discredited video by the anti-abortion group Center for Medical Progress (“CMP”), were that Planned Parenthood financially profited from the illegal sale of fetal tissue following abortions conducted on its premises. Planned Parenthood has vehemently denied these allegations on numerous occasions, and has been unwavering in its position that with regard to abortion regulations, it not only follows the law, but exceeds legal requirements. The CMP video is now widely considered unreliable propaganda; in fact, the SJC report began with a special note specifically attributing public awareness of fetal tissue donation to CMP’s video, but then completely disclaiming the relevance of that video. According to the SJC, “criticism of the CMP videos or of the techniques CMP used to create them are generally irrelevant to this report.” That was kind of a cute move – starting off a major report by mentioning something “irrelevant,” but irresistibly salacious. Certainly, an opposing argument is easily made that while the fake CMP video itself is irrelevant because it’s fake, criticism of the video of CMP’s techniques is actually highly relevant to any discussion of Planned Parenthood and its fiercest opponents.

The SJC report also acknowledged that the Department of Justice has already investigated Planned Parenthood twice with regard to fetal-tissue allegations, and that neither investigation resulted in prosecution. The investigation and subsequent lack of prosecution is the same kind of double-edged political tool as the Hillary Clinton e-mail investigation was during the campaign; those who are convinced of wrongdoing will deem the fruitless investigations typical partisan failures and shams, while those in opposition will interpret the lack of prosecution as a full exoneration.   Whatever anyone’s views on Planned Parenthood are, the SJC has laid out a perfect partisan blueprint to reframe the abortion debate as something ultimately more winnable and broader in effect than a reversal of Roe.

Overturning Roe v. Wade would be a difficult legal feat, requiring SCOTUS to upend a forty year-old precedent and backtrack on the legal meaning of “privacy;” if such a change could be accomplished, its effect would be profound, but also somewhat geographically contained. Abortion is a state issue, to be regulated by state legislatures, but Roe sets out acceptable parameters for those regulations. Without Roe’s limitations, quite a few states would likely pass abortion laws that simply prohibit (maybe even criminalize) abortion altogether. Without Roe’s guidelines, more liberal states would likely maintain their existing moderate abortion laws, which generally allow abortion early in pregnancy, but restrict it during the second and third trimesters.   But a full-scale attack on Planned Parenthood like the one mandated by the SJC circumvents the legislative process completely. It does not tackle the difficult question “What should the law say about abortion?” but rather, it proceeds with the far simpler conclusion that its subject has violated existing laws.

For decades, there has been “the abortion issue,” a complex and often inflammatory legal, moral, and philosophical debate about how best to balance women’s right to reproductive freedom and privacy against the right of society to protect a developing fetus. The SJC now suggests a new framework that lacks pesky nuances; Planned Parenthood has now been cast as a tangible enemy. And the issue at hand is no longer abortion, but rather, “selling baby parts” – an incendiary and propagandized characterization created for its power to rally even moderate pro-lifers. This newer, more streamlined war on reproductive freedom promises to be as damaging as it is popular. While conservatives (and likely, many moderates) begin their crusade against Planned Parenthood’s alleged crimes, the organization and others like it will find themselves drowning in a costly, politicized, and endless investigations. The only certain outcome of these investigations will be that the many women who rely on Planned Parenthood for health assistance unrelated to abortion will be harmed – collateral damage that isn’t mentioned anywhere in those 547 pages.