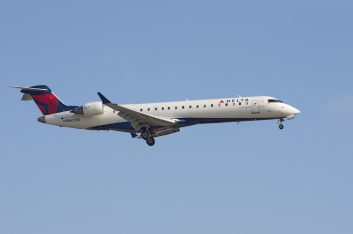 A Skywest pilot scheduled to fly a Delta Connection commuter jet out of Rapid City, SD on Wednesday was removed from the aircraft by police due to reports he “smelled of alcohol.”

KOTA-TV reports police were called on to the aircraft just about 30 minutes before it was scheduled to depart en route to Salt Lake City.  The airline told passengers there were “crew issues,” but Rapid City Police Chief Karl Jegeris later announced his officers had “arrested a Skywest Airlines pilot for operation of an aircraft while intoxicated.”

The pilot was identified as 38-year-old Russel Duszak of Salt Lake City, UT.

Dayrn Farmer, a passenger on the scheduled flight, told the news station he noticed a police officer standing with a crew member as passengers started to the board the plane, but they were told very little about what was going on.

The passengers were then taken off the plane and had to wait another two hours while the airline arranged for another crew to takeover the flight.

Farmer said the delay ultimately caused him to miss his connecting flight home to Oregon.

“Now we have a long day getting home,” Farmer said.