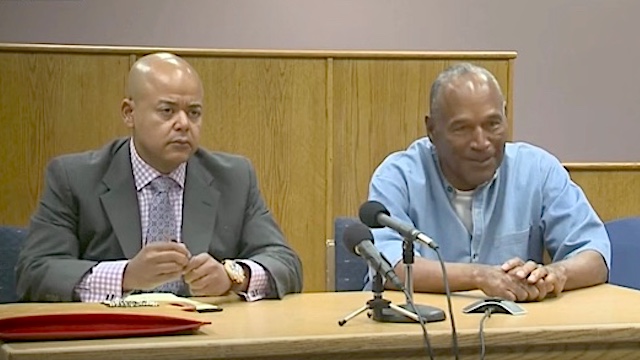 O.J. Simpson lawyer Malcolm LaVergne is continuing to troll Kim and Fred Goldman (the sister and father of murder victim Ron Goldman) on Twitter.   It’s been going on for weeks, and it’s getting uglier. LaVergne has done everything from calling the Goldmans “greedy,” to coining the weirdly Trumpesque moniker “Wacky Kim,” to comparing the Goldmans’ attempt to collect on their civil judgment to “slavery” that’s “designed to dehumanize” Mr. Simpson.

Wacky Kim and her professional publicists have been peddling this story for years. Self generate a story and then peddle it to the media for profit. If she wants, I can give her his new address to send more cards and love letters on the outside now. Fair enough, right? M.

LaVergne has also made several attempts to start a twitter feud with Law & Crime founder Dan Abrams, in retaliation for Abrams’ having called LaVergne out for his wildly inappropriate tweets.

Did Wacky Kim honestly believe she and her buddy, no talent Dan Abrams, would shut me down with that cyber bullying stunt in November? It only validated my point. I should get a professional publicist and self generate stories about the Greedy Goldmans. See how they like it. M.

Americans may not be of one mind when it comes to O.J. Simpson, but I think we can all agree that cyber-antagonizing the Goldmans is nothing short of grotesque.  There just aren’t a lot of things worse than haranguing the family members of a young man who was brutally slain, especially when you represent the man who was (civilly, of course) found responsible.  There is the possibility that LaVergne’s conduct constitutes a violation of Nevada’s ethical rules. After all, lawyer-jokes aside, attorneys are expected — indeed required — to comply with standards of professional responsibility.

The Nevada Rules of Professional Conduct provide the following:

“Rule 4.4 Respect for the Rights of Third Persons

In representing a client, a lawyer shall not use means that have no substantial purpose other than to embarrass, delay, or burden a third person…”

I suppose LaVergne’s “substantial purpose” for trolling family members of murder victims would be zealous advocacy of his client, or perhaps gaining a little publicity for himself.  While I’m not quite sure that’s what the Nevada Bar had in mind, it could be an adequate defense to a charge or professional misconduct.

There’s also a rule prohibiting what can be said in attorney advertisements. While only some Twitter posts strictly count as “advertising,” the sentiment is pretty clear:

“There shall be no dramatizations, testimonials or endorsements in any advertisement in any medium. A lawyer’s advertisement, regardless of medium, must provide only useful, factual information presented in a nonsensational manner…”

I’m pretty sure posting that “Wacky Kim” is invited “to send more cards and love letters” to the man found liable for causing the death of her brother does not constitute communication in a “nonsensational manner,” but the advertising rules are more often used to regulate things like over-the-top testimonials and self-declared “experts.”

The State of Nevada has adopted the American Bar Association(ABA) rules of professional responsibility in total, and the ABA has issued some guidance for interpretation as follows:

“When attorneys are belligerent, aggressive or offensive, they misunderstand the true meaning of zeal and how to act with it.

…a lawyer should use the law’s procedures only for legitimate purposes and not to harass or intimidate others.”

Strictly speaking, it’s probably a bad idea to lash out at the family of someone your client has been found to have been civilly liable for — but then again, maybe there’s a “legitimate purpose” lurking out there somewhere.

Anyone who practices close to the world of criminal law sees a ton of crazy; still, a lawyer antagonizing victims who have already established civil liability against his client is some next-level insanity.  Lawyers deal in “fault,” and in the matter of the death of Ron Goldman, the court has spoken: the fault falls squarely on O.J. Simpson’s broad shoulders. While Simpson’s counsel may not have clearly violated any rule, I don’t think I’m alone in finding that a lawyer who disparages a litigant for attempting to execute on the judgment that’s rightfully theirs has seriously stretched the bounds of professionalism; a person who has done so in an intentional death case leaves “professional“ in the dust.  While I get the need to deflect, there’s just no room here for throwing other blame of any kind — not toward Dan Abrams, and certainly not toward Kim or Fred Goldman.

Judging from the rest of LaVergne’s Twitter feed, when he’s not on the attack, he’s attempting to ingratiate himself to those who might be impressed by his apparent proximity to O.J. Simpson:

I haven’t asked Mr. Simpson about his Christmas plans … yet. If you want to wish him a Merry Christmas, I’ll pass it along. :). M.

I think we can file this one under “Bad Judgment At Every Turn.”