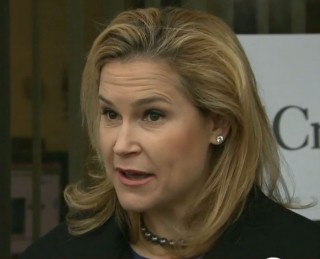 In case you were wondering where all of the wife name-calling could lead in the 2016 Presidential election. Unfortunately, it went here. Andrew Anglin, the founder of the notorious neo-Nazi website, The Daily Stormer, said that Ted Cruz’s wife, Heidi, “should be in prison or execute[d] for high treason.” The Southern Poverty Law Center, which tracks hate groups, first brought attention to this disturbing post. When we checked this morning, those specific words appeared to have been deleted, but those that remained were equally as disturbing.

You get the point. No need to go on.  This came after Trump started a twitter firestorm threatening to “spill the beans” on Cruz’s wife. He was upset about a PAC’s political ad which showed his wife, Melania, in the nude. That ad by the way was not sponsored by the Cruz campaign.

As for these latest threats, Daily Stormer is the same website that hosted racist rants by Dylann Roof, accused of shooting 9 people in a Charleston church. According to The Southern Poverty Law Center,  “Daily Stormer is the brainchild of neo-Nazi hotshot Andrew Anglin, a 30-year-old who grew up in Ohio but has lived in Asia and Europe. Anglin is a self-professed National Socialist who told Hatewatch, ‘I believe strongly that European people have a right to a continued existence as an independent culture and ethnic group.”

Federal law actually prohibits people from threatening to kill the families of presidential candidates. 18 U.S. Code 879 says that “Whoever knowingly and willfully threatens to kill, kidnap, or inflict bodily harm upon…a major candidate for the office of President or Vice President, or a member of the immediate family of such candidate” shall be fined or imprisoned not more than 5 years. LawNewz.com left a message with the FBI asking if they were looking into this apparent threat, but have not heard back.

Anglin is a vocal Trump supporter, calling him a “glorious leader.”  Trump has disavowed any support from White Supremacists on numerous occasions.

Update 5:00 pm  We spoke with Bill Thomas, a former federal prosecutor, about whether Anglin committed a federal crime:

“About 16 years ago I prosecuted the first “threat” case against President –elect Bush.  He had not been sworn into office yet.”

“While it is a crime to threaten family members of   “major” presidential candidates, the comments here are not threats.   Threat is defined as a “statement expressing an intention to kill or injure.” Here, the author of this comment is (in artfully) advocating that Ms. Cruz be prosecuted and punished (“. . . in prison or executed”) for a perceived infraction of the law (“high treason”).”

No federal crime (or any crime) here.