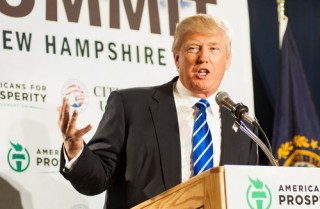 With hundreds of delegates up for grabs after Marco Rubio and Ben Carson dropped out of the Republican presidential race, Donald Trump is planning his strategy to snatch as many as he can, NBC News reports. Trump currently has 739 delegates, with 1,237 needed to secure the GOP nomination. With more than two months of primaries to go, and Ted Cruz as the closest rival with 465, Trump has a good shot to win enough primaries to lock up the nomination. But it’s still a strong possibility that no one will have the required majority of delegates after the primaries, and Trump isn’t taking any chances.

He has a team in place working on strategies to get free agent delegates who belong to candidates who suspended their campaigns, and those from states like Colorado and North Dakota, where delegates aren’t actually bound to candidates. That amounts to 323 delegates, more than the amount that currently separates Trump and Cruz.

Trump’s team includes a former political director of the Republican National Committee, a former Federal Elections Commission head, and former Carson campaign manager Barry Bennett. If the nomination isn’t secured after primaries end on June 7, their top priority is convincing enough delegates to join their side before the Republican National Convention begins on July 18. This could be crucial, because if no winner is declared after the first round of voting at the convention, delegates from all candidates become up for grabs. While Trump would then be able to lobby to get more delegates, he would also risk losing ones he currently has.

Bennett told NBC that strategies to sway delegates could include campaigning in their states or doing fundraisers for their local parties, putting language in Trump’s platform that cater to issues they care about, “or all kinds of crazy things that are important to whoever the delegate it.” As LawNewz.com has covered, “all kinds of crazy things” is open to all sorts of interpretation.

The next few months of campaigning could potentially get ugly, but despite all the delegate preparations, Trump’s camp is confident it won’t be necessary. Bennett said to NBC, “If we do pretty well — just pretty well — we’re at 1400.” But better safe than sorry.