Mom Pleads Not Guilty to Abducting Kids From Dad in 1985 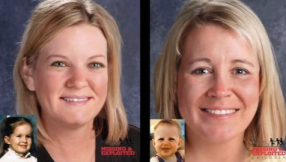 WARWICK, R.I. (AP) — A woman charged with abducting her two daughters from their father in 1985 pleaded not guilty Wednesday, and a judge allowed her to be released and return to her home in Houston.

Elaine Yates, who had been living under the name Liana Lynn Waldberg in Houston, said little during the brief arraignment in Kent County Superior Court in Rhode Island on an abduction charge, but she referred to herself as Liana Waldberg.

The girls’ father, Russell Yates, did not attend the hearing, but two cousins and a friend of the mother attended to show their support. One of her cousins, Richard Patenaude, said he was relieved everybody is OK.

Magistrate Judge John McBurney set bail at $50,000 personal recognizance and allowed her to return to Houston to live and work with a requirement that she sign a waiver of extradition and surrender her passport. He set hearings for Feb. 1 to determine her attorney and Feb. 15 for a pretrial conference.

An anonymous tip two days before Christmas led authorities to Kimberly and Kelly Yates and their 69-year-old mother, according to Rhode Island State Police. Elaine Yates was arrested Monday without incident.

Kelly Yates was 10 months old and Kimberly was 3 years old when they disappeared. They are now in their 30s.

They are not living with their mother but are in the Houston area and are in good health, said state police Lt. Col. Joseph Philbin.

Police gave the girls contact information for their father, and it was their choice whether to reach out to him.

“I’ve always been trying to find my children,” the father told reporters on Tuesday. “Now at least, it’s up to them to get in touch with me.”

Russell Yates said after their disappearance that his wife had found out he had been unfaithful to her and had threatened to move out in the middle of the night with the children. He acknowledged punching her while they argued. A few weeks later, on Aug. 27, 1985, he came home after work around 2 a.m. and they were gone.

The case was featured on “America’s Most Wanted,” and police received tips from all over the country. But it wasn’t until investigators received the anonymous tip late last year that they cracked the case.

It says the Texas Department of Public Safety had examined the petition and found she had no recorded criminal history. At the time, a felony warrant for child snatching issued in 1988 was outstanding in Rhode Island.

As for the mother, Philbin described her as being very cooperative with investigators since police knocked on her door Monday.

When asked if Elaine Yates should be prosecuted, Russell Yates said on Tuesday: “That isn’t going to help me, her or anybody else at this point. I just want to see my kids.”