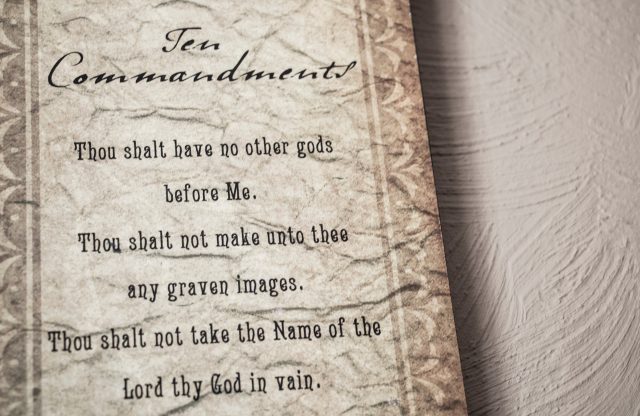 The Mississippi State Legislature is at it again. This time, instead of legislating state-sanctioned discrimination against LGBT people, it is turning public schools into religious institutions. Check out House Bill 100:

“Principals and teachers in each public elementary and secondary school of each school district in this state shall display on an appropriately framed background with minimum dimensions of eleven (11) inches by fourteen (14) inches, the Ten Commandments in each classroom and the following motto of the United States of America in each classroom, school auditorium and school cafeteria under his or her supervision: ‘IN GOD WE TRUST.’

Bet you thought I was exaggerating a bit. But no, Mississippi actually just wrote a law that would force students to recite the Ten Commandments every day at school.   And even that’s not enough. The bill also turns every corner of every school – from the auditorium to the lunchroom – into a little sanctuary of Christian goodness; Kids and teachers can now gaze upon giant (mandatory) postings of the Ten Commandments while they engage in their (also mandatory) daily moments of silence. And before you start complaining that the GOP is at it again, this bill was proposed by Credell Calhoun, a Democrat – further proof that neither party has cornered the market on stupidity.

Putting aside the pure insanity of this entire idea (please picture first-graders chanting about coveting thy neighbor’s wife in between learning phonics and struggling with juice boxes), let’s talk about the unadulterated illegality of it all. The First Amendment forbids government from ramming religion down the throats of Americans. In more refined legalese, the Establishment Clause of the First Amendment is violated when legislation involves religion without some legitimate secular or legislative purpose. The government may not establish an official American religion, nor may it take action that unduly favors one religion over others. If you’re thinking, “reciting the Ten Commandments in school sounds a lot like favoring Christianity,” you’d be getting the point.

Don’t just take my word for it. The Supreme Court clarified all this back in 1980 in case called Stone v. Graham. Back then, Kentucky tried to legislate the posting of the Ten Commandments in classrooms. Kentucky thought it was being clever in arguing that because the posters were privately purchased, the law didn’t violate the First Amendment. SCOTUS said exactly what you’d expect; classrooms are public, commandments are religious, the statute was unconstitutional.

There have been several other cases involving government postings of the Ten Commandments, most of which have been struck down (including one in Alabama where former chief justice, Roy Moore, defied a federal order to dismantle a Ten Commandments monument in the rotunda of the State Supreme Court). In 2005, Justice David Souter argued that government should be neutral toward religion in order to minimize contemporary culture wars:

“We are centuries away from the St. Bartholomew’s Day Massacre and the treatment of heretics in early Massachusetts, but the divisiveness of religion in current public life is inescapable. This is no time to deny the prudence of understanding the [First Amendment] to require the Government to stay neutral on religious belief, which is reserved for the conscience of the individual.”

I get that in Mississippi Bible Country, Credell Calhoun thought it was a spectacular idea to add a little more Jesus into the school day. As obnoxious and exclusive as it is for a state legislator to attempt to impose his religious beliefs on everyone, I’m far more disturbed that lawmakers out there are this unfamiliar with the Constitution and Supreme Court precedent. A quick Google search would’ve told Calhoun that his idea was a no-go; his brand of bratty and sloppy legislating, willfully blind to context or consequences, and without respect for the very principles on which this country was founded, is profoundly disrespectful to both church and state.