Jail Guard Shot Himself in Leg Before Job Interview, Literally 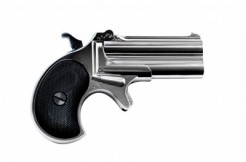 A jail guard in Panama City, Florida is being investigated after reportedly shooting himself in the leg before a job interview at a nearby school.

Travis Anthony Holland, 28, popped a cap in himself on Friday, according to a News Herald report.

A part-time detention officer, he was at a parking lot for Oscar Patterson Elementary School. There, he was seeking another part-time gig for janitorial work, according to Panama City Police Department reports obtained by the Herald. Holland picked this moment to reload his Derringer with a new round, when it accidentally fired, catching him in the thigh.

No other injuries were reported. PCPD initially determined they wouldn’t push for criminal charges, but they’re still investigating. So are Holland’s employers at the Bay County Sheriff’s Office.

“We’ll be investigating this case like any other internal investigation,” Bay County Sheriff’s Office Maj. Tommy Ford told the Herald. “It will be seriously reviewed to determine whether there could be disciplinary action, additional training or policy changes.”