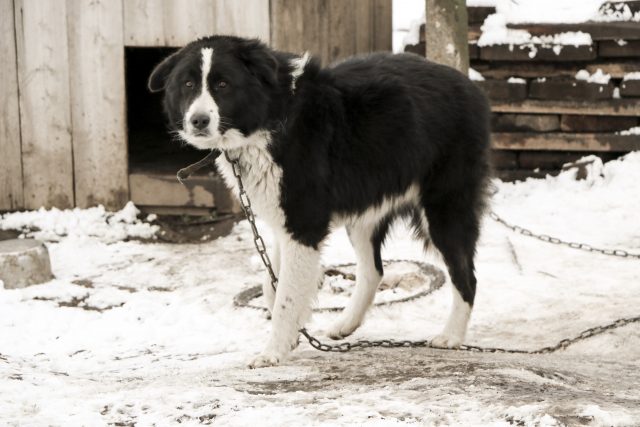 The icy blast of weather that’s nipping much of the United States has led to the familiar drumbeat of warnings:  (1) stockpile bread, milk, and water in your bunker; (2) check on the elderly, including your parents, because, hey, when you were a teenager, they seemed ancient; and (3) take care of your pets.

It’s number three that’s worth our attention:  it should go without saying that pets need to be brought inside or otherwise cared for during weather such as this, but in many states, it’s flat out illegal to leave pets outside during cold and/or inclement weather. Indeed, in at least one state, you can go to jail for keeping a dog in a doghouse which doesn’t meet statutory minimum requirements.

A few counties have enacted emergency rules such as this one which state animals cannot be left outside unattended and that violators could face prosecution. The warning also states that animal services workers will be actively patrolling for violators during severe weather.

Many states, either through statutes or case law, include the leaving of an animal out in cold weather under the definition of animal cruelty, which carries either a fine or possible jail time, or both.

New York statutes require appropriate shelters for dogs left outdoors. The shelter must be “appropriate to” the dog’s “breed, physical condition and the climate.” (A miniature poodle obviously requires more shelter than an Alaskan Malamute.) A first offense carries a $50 to $100 fine.

A number of states, such as Minnesota, have very specific legal requirements for doghouses:

The shelter shall include a moistureproof and windproof structure of suitable size to accommodate the dog and allow retention of body heat. It shall be made of durable material with a solid, moisture-proof floor or a floor raised at least two inches from the ground. Between November 1 and March 31 the structure must have a windbreak at the entrance. The structure shall be provided with a sufficient quantity of suitable bedding material consisting of hay, straw, cedar shavings, blankets, or the equivalent, to provide insulation and protection against cold and dampness and promote retention of body heat.

It’s a misdemeanor in Minnesota to not have a properly-constructed dog house. So, yes, you can go to jail for having an improper doghouse in Minnesota.

Maine has a similar law which even specifies the quality of insulation which must be present in a doghouse:

A shelter must be provided that is fully enclosed except for a portal. The portal must be of a sufficient size to allow the dog unimpeded passage into and out of the structure. For dogs other than arctic breeds, the portal must be constructed with a baffle or other means of keeping wind and precipitation out of the interior. The shelter must be constructed of materials with a thermal resistance factor of 0.9 or greater and must contain clean bedding material sufficient to retain the dog’s normal body heat.

Inadequate shelter may be indicated by the shivering of the dog due to cold weather for a continuous period of 10 minutes or by symptoms of frostbite or hypothermia. A metal barrel is not adequate shelter for a dog.

Maine’s penalty for breaking these laws is a $500 to $2,500 fine, possible criminal prosecution, and possible civil litigation.

Maine is among a group of states which clearly define cold-weather pet care issues under the definition of “animal cruelty.” In other states, such as Minnesota, injuries to an animal which result in “death or great bodily harm” or “substantial bodily harm” are grounds for animal cruelty charges. Cold weather issues at least arguably could fit under those definitions. Minnesota sets different punishments depending on the severity of injury to the animal.

The Massachusetts Supreme Judicial Court recently had to consider whether the Fourth Amendment’s protection against warrantless government intrusion should prevent the police from rescuing animals left out in the cold. The court ruled that “warrantless searches of a home are permissible where they are intended to render emergency assistance to protect nonhuman animal life.”  The court also noted that it was “illogical and inconsistent to permit the prosecution of dog owners for exposing their dogs to conditions that could injure or kill them . . . only after the harm to animal life has taken place, while hindering the ability of police proactively to prevent such injury.” The Massachusetts court pointed to similar standards in Montana, Rhode Island, California, Florida, Indiana, Oregon, New York, and the District of Columbia, just to name a short list.

To see where your state stands on animal law matters, this map created by Michigan State University is a good start.