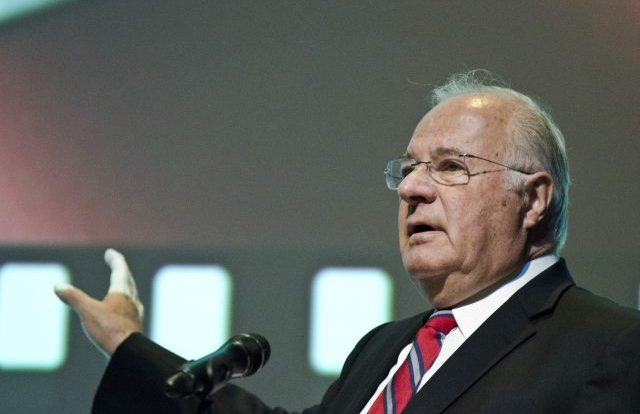 A billionaire-funded political organization operating out of a P.O. Box in Herndon, Virginia, with no employees or volunteers doesn’t exactly scream “social welfare.” But that’s precisely what a pro-Trump group, called 45Committee, claims it exists to do.

New tax documents obtained by OpenSecrets show that the group spent $45 million from the run-up to the 2016 presidential election into the early days of President Trump’s administration. The money that fueled the spending was raised from just a handful of wealthy, anonymous donors — most of whom gave more than $1 million each.

Groups like 45Committee are not political committees, and therefore don’t have to disclose their donors to the public. They’re also not supposed to have politics as their primary purpose, but the IRS and Federal Election Commission have proven to be woefully ill-equipped at policing nonprofit political activity. As a result, these “dark money” groups have become the vehicle of choice for wealthy corporate and individual donors who want to spend heavily in elections without the public knowing who is filling their war chest.

The filing, which was first reported by CREW, shows that $30 million of the $46.3 million raised by 45Committee came from just four anonymous donors who gave $7.5 million each.

The 45Committee and its sister super PAC, Future45, were formed in October 2015 with an aim to destroy Hillary Clinton’s nascent presidential campaign.

The groups were backed by hedge-fund billionaires like Ken Griffin and Paul Singer, according to news reports, and by early “Never Trumpers”-turned-Trump supporters, Joe and Marlene Ricketts, the owners of the Chicago Cubs.

When the news came out that Ricketts was fueling the group, Trump launched a threatening tweet, saying the “Rickets [sic] family … better be careful, they have a lot to hide!”

I hear the Rickets family, who own the Chicago Cubs, are secretly spending $’s against me. They better be careful, they have a lot to hide!

After the tweet, Joe Ricketts donated another $1 million to Our Principles, and Trump upped the ante. In an interview with The Washington Post’s editorial board, Trump threatened to fund ads attacking the family, telling the public “what a rotten job they’re doing with the Chicago Cubs.” (Seven months later, the Cubs won the World Series for the first time in more than 100 years).

As it became clearer that Trump would become the Republican nominee, both 45-branded groups went largely silent. But in the final months of the election, Ricketts made good with Trump, took over the groups and rebranded them as pro-Trump vehicles.

It was at this point that the 45Committee’s role became crucial because as a 501(c)(4) social welfare organization, it doesn’t have to disclose its donors. One fundraiser familiar with the Ricketts’ operation put it bluntly to Politico, saying “There is a substantial appetite for a nondisclosing vehicle, because it’s embarrassing to support Trump.”

Together, the two groups spent more than $45.6 million in 2016, 98 percent of which came in the final two months of the election, helping Trump squeak out a historic victory. Nearly half of the total spending, $21.3 million, came from the nominally apolitical 45Committee.

The new 45Committee tax filing is a case study in how politically active nonprofits spend millions to influence politics, without disclosing their donors, while maintaining the illusion that they are a 501(c)(4) social welfare organization.

The key, when it comes to filing a return with the IRS is not necessarily what a group spends on direct political activity; it’s what it does to make sure that that spending is less than half of its overall outlays. So to avoid raising alarm bells at the IRS, most groups spend heavily on grants to other politically active nonprofits and on “educational” or “issue” ads that have some vague attachment to the group’s stated mission.

The 45Committee did both. It gave out more than $3.6 million in grants to other nonprofits, the largest of which was a $2 million grant that went to Secure America Now, which spent $1 million in 2016. It also gave to the National Rifle Association and the U.S. Chamber of Commerce, both of which were very active in the 2016 elections.

And then there are the ads. While 45Committee only reported $21.3 million to the FEC, the filing shows that it paid $38.3 million — more than 84 percent of its overall outlays — to media firms providing “media ad services.”

Aside from ads the group ran in the 2016 election aimed at hobbling Trump’s opponent, 45Committee spent at least $4 million supporting Trump’s cabinet nominees after the election. This is important because it establishes that the group has little-to-no mission beyond supporting Trump in one way or another. It does not have major initiatives beyond running ads, and all of the group’s ads benefit Trump in some way.

If the IRS were to look at this activity, it may decide that the 45Committee provided excessive benefit to a single person — a big no-no for nonprofits. That person of course is Donald Trump. But for the IRS to rule on something like this, it would have to audit the 45Committee and conduct a “facts and circumstances” analysis of the groups activities, which is a longshot: The IRS only audits seven out of every 1,000 returns it receives from nonprofits every year.

Written by Robert Maguire from Open Secrets and reprinted with permission by LawandCrime.com. The original version of the story appeared here. Open Secrets is a non-partisan nonprofit organization which tracks money in U.S. politics.